The city of Diest

Diest is a charming little town on the borderline between the provinces of Brabant and Limburg, about 60 km from Brussels, surrounded by high ramparts, which are partially preserved.

The town has a fascinating ‘Orange’ history because for almost three centuries, between 1499 and 1795, the city was in the hands of the Counts of Nassau, the later Princes of Orange-Nassau who, after the Napoleonic Wars, also became the current Royal Dynasty of the Netherlands.

The first famous member of the House of Orange-Nassau was William I “the Silent” (1533-1584), who led the revolt of the United Provinces against Spain.

Diest, together with Breda (NL), Dillenburg (GE) and Orange (FR), is part of the Union of the Orange Cities (see below, further background).

The Grote Markt (Central Square) is surrounded by picturesque houses and buildings from the 16-18th century and each of them has a story attached to it.

This will be mainly an ‘open air’ activity, as the idea is to walk through the narrow streets, hoping to enjoy the famous carillon of the Saint-Sulpitius Church, where Philip William, the son of William I of Orange-Nassau is buried.

The lasting testimonies to the ‘Dutch’ period include the Court of Nassau, city park the ‘Warande’ –  the former hunting ground of the princes – and the 16th century water mill. The presbytery with the gravestone of Philip William can also be visited in Saint Sulpitius Church. In addition, an entire section of the City Museum ‘De Hofstadt’ is dedicated to Orange Nassau. 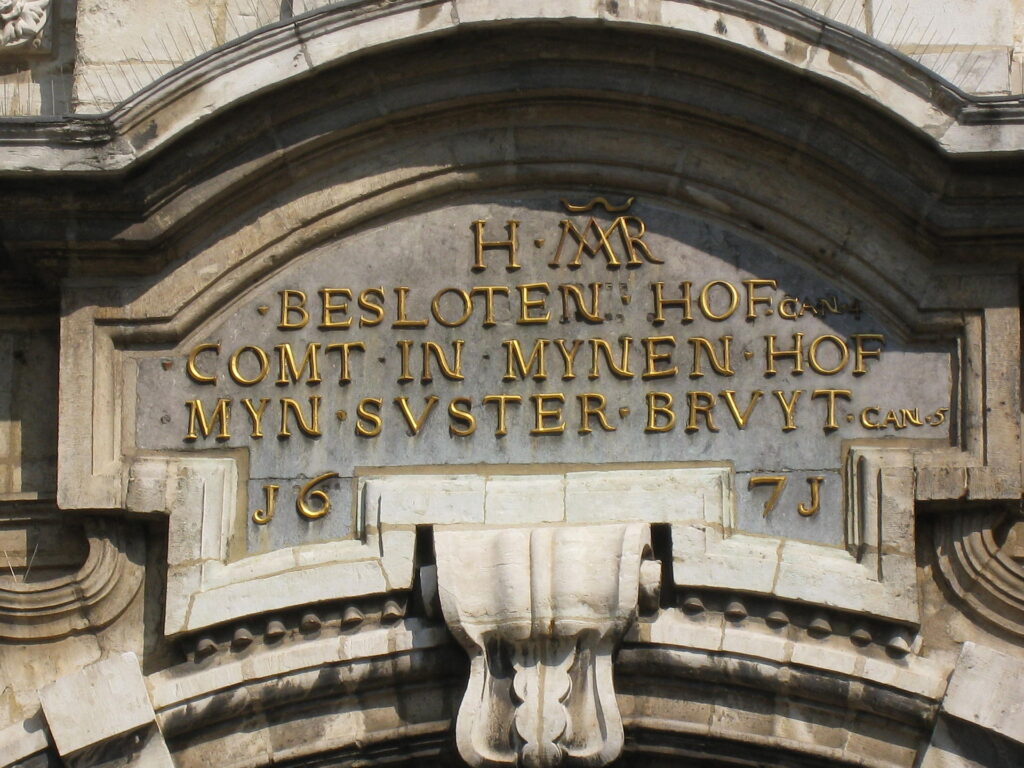 Inscription above the entrance gate to the beguinage

After lunch, we will visit the Museum of the Belgian Paratroopers, Pegasus, on the city’s citadel, where we will hear about the formation of the first Belgian paratrooper regiment during WWII, on British soil and by British paratroopers! The regimental traditions, including the crest and motto, were heavily influenced by the experience of many of its personnel in the British SAS during the Second World War.

In four rooms and a few small casemates, the Pegasus Museum tells the history and achievements of the Belgian Paratroopers from the start to the present, with documents, photos, objects and equipment.

From August 1953 until its dissolution in August 2010 – the city’s citadel was home to the 1st Parachute Battalion. The last soldiers left the Citadel on July 1, 2011. Only the museum has been preserved as a testimonial and can be visited by appointment.

Currently, the Training Center for Parachutists (TrgC Para) of the Belgian ParaCommandos is located at Schaffen Air Base, a Belgian Air Force Base, 2 km northeast of Diest.

The Union of Orange Cities
On 31 August 1963, the cities of Breda, Diest, Dillenburg and Orange founded the Union of Orange Cities in Breda. The twinning between Orange – the principality of the counts of Nassau – and Breda, where the Nassaus resided for over a century and a half, was the Union’s starting point. Dillenburg, the oldest residence of the Nassaus, and Diest, where Philip William, the eldest son of William the Silent is buried, also joined the Union.