Art and Nature in one Place – A Corona-proof walk

CANCELLED – As a result of the stricter corona measures, (museum) tours are not allowed until March 31.

The Middelheim Museum in Antwerp is one of the most original open-air museums in the world. A wonderful city-based sculpture park with a historic collection ranging from Rodin to Ai Weiwei.

The museum offers a fascinating overview of more than hundred years of visual arts in an exceptional setting. Art and nature in one place. It never fails to cheer you up.

When you register for this event, you will receive suggestions of places nearby where you can have your individual lunch. 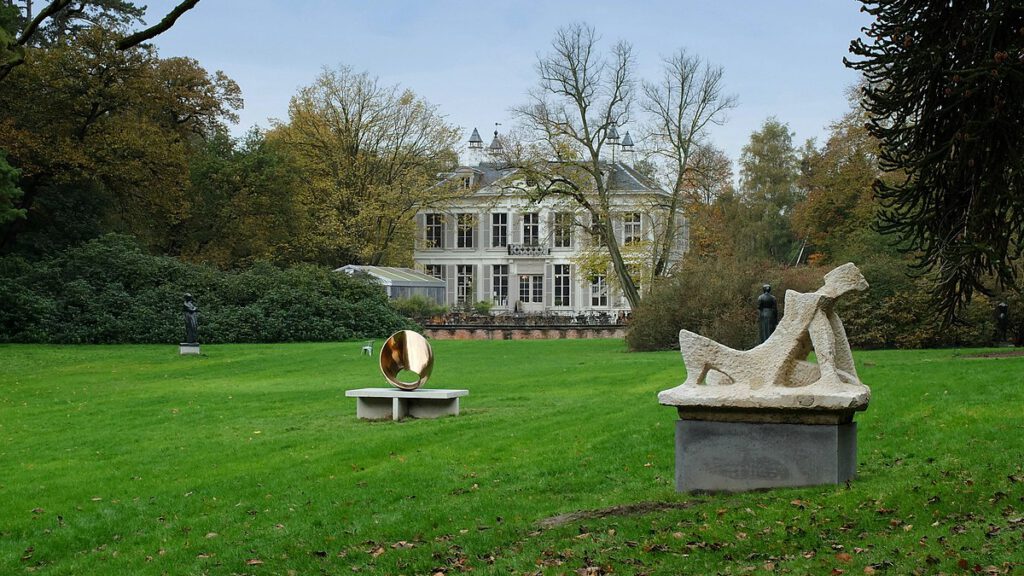 The Beeldentuin Middelheim Museum in Antwerp is an impressive 30-hectare park, next to the larger Nachtegalen Park.

The estate was first mentioned in 1342 as a ‘stede geheten Middelheim’. Since the 16th century the manor house and grounds were used as a summer residence for wealthy merchants from Antwerp.

In 1910, the Municipality of Antwerp acquired the Middelheim estate to prevent it from being parceled up. It was turned into a public park and part of the land made available for the establishment of Middelheim Hospital and the University of Antwerp.

In 1950, an international sculpture exhibition was organized for the first time in Middelheim Park, on 20 hectares behind the house, the oldest section. At the suggestion of Mayor Lode Craeybeckx (the Documentation Centre in the Orangerie is named after him) the town council decided to establish a permanent open-air sculpture museum here.

Since 1951, and until 1989, internationally renowned biennial sculpture exhibitions were organized during the summer months. In 1971, the Braem Pavilion was inaugurated, to the design of the Antwerp modernist architect Renaat Braem. It houses smaller or more fragile sculptures and works that cannot be displayed in open air.

In 1993 Antwerp was the Cultural Capital of Europe and on that occasion the city council decided to relaunch the museum’s collection with permanent artworks. Ten contemporary and internationally acclaimed artists were invited to create a new work, that would be purchased by Antwerp ’93, and donated after the course of the cultural year to the Middelheim Museum. Since 1993 the purchasing budget is being spent on contemporary art.

The year 2000 was another turning point. The park was extended with seven hectares of land and the new space made it possible to rearrange the collection and host more temporary exhibitions. A new depot was also built (architect Stéphane Beel). It is designed as an open depot with a functional, changeable layout where the public can become acquainted with unknown or lesser-known works of art from the museum’s collection.

In May 2012, the Middelheim Museum reopened after a renovation. The transformation was spectacular: the museum was significantly expanded, and the infrastructure had been modernized. The collection was revised, and renowned artists created new works specifically for the museum.

Furthermore, the Hortiflora garden, the former flower garden of the Nachtegalen Park was incorporated in the Middelheim Museum, as a natural connection to the larger park. This area is reserved for temporary exhibitions. To this end, the Belgian architects Robbrecht and Daem designed an exhibition pavilion, Het Huis, which is now a central feature of the museum’s exhibition policy. It’s a five-meter-high transparent semi-open volume with a clear geometry, introducing new lines into the landscape.