On the Friday we will travel by Eurostar to St Pancras where we will be met by a coach to take us to Hatfield House and Park, a Tudor palace which rivals Hampton Court in splendour and interest.

The original palace, built in 1497, was for some years the home of Princess Elizabeth Tudor, later to become Queen Elizabeth I, and her chief advisor was William Cecil, the owner of Hatfield House. The Cecil family played a part in political life down the generations, including Robert Cecil, Prime Minister to Queen Victoria. 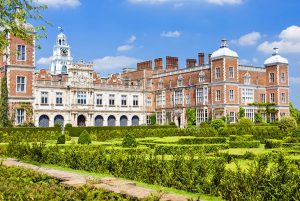 Late afternoon, we will be dropped off at our normal residence in the Halls of Imperial College, where we will stay for the three nights. Rooms – single, twin and double – are simple, but all with en-suite bathrooms.

We will have supper at one of the world’s great museums, the Victoria and Albert. Not only does it house collections ranging from classical sculpture to historical costume, but the building itself is a striking example of the Victorian Gothic style, with, in addition, elaborate William Morris rooms and a 21st Century extension by Amanda Levete. Friday is late night opening, so we shall have a chance to explore.

On Saturday, we travel by public transport to Covent Garden for a backstage tour of the Royal Opera House. In the afternoon we will visit the NT property Sutton House in the East-end of London. Dinner locally in South Kensington.

We start Sunday with a guided walk along the South Bank , which will include Borough Market, Southwark cathedral and The Clink, one of the old prisons. After lunch we shall have a guided tour of the Globe theatre, a reconstruction of the famous 16th century home of Shakespeare’s plays. Dinner locally.

On Monday morning we shall visit the Postal Museum, which opened in 2017, a fascinating history of the development of a national network of postal delivery, followed by taking a ride on the underground postal train which connected the main rail termini in London. After this, there will be some free time for other sightseeing and/or shopping.

We will return to Brussels late afternoon from St Pancras.

The package will cover accommodation, travel to London, local travel once there, evening meals plus costs of entry to places to be visited.

Total cost is €680 per person, sharing twin or double room. A supplement of €95 is required for anyone wanting a single room.

If interested please let Nicholas Fern know as soon as possible by mail or by telephone 02/217 0116.

A deposit of €100 to the NTAB bank account secures a place.