The Citadel of Dinant, a truly amazing historical fortress on top of a rock overlooking the city, offers a beautiful view of the Meuse and the surrounding area. In the afternoon, we will be enchanted by the Castle of Freÿr, the former summer residence of the Dukes of Beaufort-Spontin, its harmonious architecture, its walled terraced gardens and its rippling fountains. 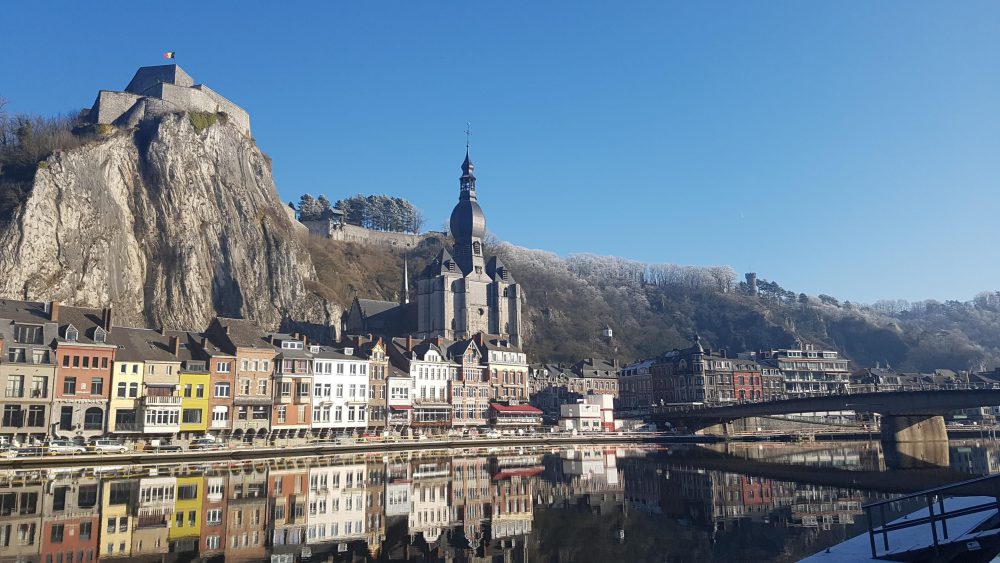 PROGRAMME OF THE DAY:

We gather at the Dinant Railway station (Gare de Dinant). There are plenty of parking spaces behind the building.

After a headcount, we form groups of four per car. These will be our ‘team mates’ for the entire day, also in the restaurant.

Our first stop of the day is the magnificent Dinant Citadel, built by the Dutch on the vestiges of the city’s Medieval castle in the 19th century. A short leisurely walk across the Meuse will take us there, and we will visit the pride and joy of Dinant with an English-speaking guide.

After our visit, we head back to our meeting point, crossing the river Meuse on the Charles De Gaulle bridge, once again.

! After a short stroll, we will arrive at the restaurant.

One course lunch (beverage and coffee or tea included) in this cozy restaurant with a splendid view over the city. Tip: why not choose a Leffe, since Dinant is the city where it is brewed. We then have a short walk back to the parking near the station, to retrieve our cars.

From the station, the teams of four drive up to the Château De Freÿr (map and directions below), the renaissance residence of the Dukes of Beaufort-Spontin.

One group will visit the castle with an English-speaking guide while the other marvel at the beautiful gardens designed by Lenôtre, with another guide who masters Shakespeare’s language. Afterward, we swap.

Since the Château closes at 17h, we expect to return at the Dinant Railway station around half-past five. After cruelly disbanding our teams of four and saying goodbye, we all head back home.

Please confirm your attendance to the organisers before Sept 17th

Also please confirm whether you will join us for lunch or not. When applicable,  notify us if you wish a vegetarian/vegan alternative or about any allergies before Sept 17th,  leaving us sufficient time to inform the chef well in advance.

Every history teacher will confirm: you cannot stress the importance of the fall of the Carolingian Empire enough if you truly want to understand Europe. The collapse of this once mighty empire (named after Charles Martel) led to the Frankish Empire’s rise with the illustrious Charlemagne at the helm. But that was just the start of a whole new series of events, soaked in blood, full of troubles and turmoil.

843 A.D. The three grandsons of Charlemagne inherit his empire, and each gets one part: Western Francia, Middle Francia, and Eastern Francia.

Many years later, but even more civilian wars later, the Dukes of Burgundy conquer the middle part.

The river Meuse, crisscrossing through the city of Dinant, was the natural division between the Diocese of Liège on the left bank and Bouvignes-Sur-Meuse on the right bank, which was part of the county of Namur and thus of the Dukes of Burgundy.

Fast forward to the beginning of the 15th Century. Dinant and Bouvignes-Sur-Meuse were still competitors, but this time with far less bloodshed: economics were at play. They fought for supremacy on the market. The craftmanship of brassware (“Dinanteries”) to be more precise. Dinant had the alloys, Bouvignes-Sur-Meuse had the limestone for the molds, and the marble and bluestone. In other words: they needed each other.

The trade was flourishing. The aquamariles (brass waterjugs), candlesticks, patens (a plate, usually of gold or silver, holding the Holy Host during the Eucharist. Also called patina), and other beautifully crafted items were in high demand and shipped along the Meuse, over the North sea. Both trading powers had agencies in London. The overseas trade was protected by London’s rules at sea and the Hanseatic League.

1466 «Sac de Dinant,» meaning the carnage of Dinant. The ongoing rivalry between the left and the right bank reaches a sad culmination point when the Liège side wages war on Bouvignes-Sur-Mer led by Philip the Good and Charles the bold. Atrocities, plundering, setting fire to the city, devastation, and inhumane suffering ensue.

1914-18 Second “Sac de Dinant.” Bloody battles between the Prussians and the Allied during the first World War. Among the injured: a young French lieutenant named Charles de Gaulle.

These are just two examples of how violence and, more often than not, senseless human suffering seem to form a constant in the history of Europe. Fortunately, except for the dark episode in former Yugoslavia, we will almost be at peace for 100 years. And nowadays, disputes are fought out on social media and in parliaments. Just a tiny bit more civilized, you might say, but with a whole lot less bloodshed. Oh, and of course, on football pitches, where the incredible injuries and the chilling screams are just acting performances worth an Oscar.

To the Château de Freÿr: