Park Abbey, an exceptionally well-preserved heritage on the outskirts of Leuven, was founded in 1129 by Premonstratensians (Norbertines) from Laon Abbey. For that purpose, the then duke of Leuven, Godfried I (Godfrey with the beard) donated them an immense park and a hunting lodge. 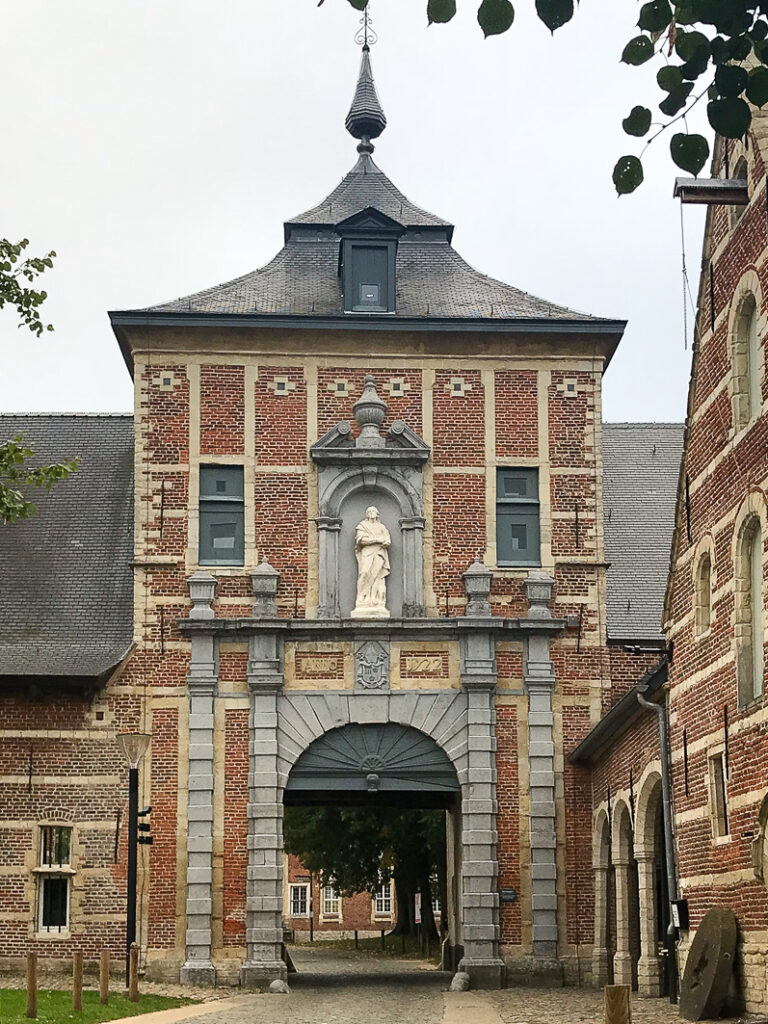 The abbey has suffered several looting and destruction periods, such as during the Reformation, the Austrian rule and after the French revolution. Nevertheless, the abbey buildings remained largely intact.

In order to give the valuable domain of Park Abbey a new future, the Norbertine fathers concluded a long lease in 2011 with the city of Leuven, which, financially supported by the Flemish government, launched a major restoration campaign for all buildings and landscapes, to be ready in 2025.

We will have a guided tour of the abbey’s restored historic rooms, such as the church, library and refectory, with their unique 17th century stucco ceilings (by Jan Christian Hansche).

The hallway is decorated with twenty virtuoso and monumental stained glass windows from the 17th century, made by the Leuven glass artist Jan de Caumont.

Lunch is served in “De Abdijmolen”, the former watermill of the abbey, now converted into a cozy restaurant: a single course meal including a drink (wine/beer/soft) and coffee or tea. Vegetarians please notify us when registering.

In the afternoon we have a tour of the city with its historic university buildings and its beguinage.

We plan to arrive at 2:30 pm at the Groot Begijnhof (‘Grand Beguinage’). Parking space will be available on the premises of the Begijnhof, via Tervuursevest.

We start with an introduction to the ‘Beguine movement’ by prof. em. Marc Vervenne, past rector of KU Leuven and today president of the Groot Begijnhof, which UNESCO added to the World Heritage list in 1998, together with 12 other Flemish Beguinages in Belgium.

Venue: the early 14th century Saint-John-the-Baptist church, one of the highlights of the ‘Grand Beguinage’.

The beguine movement emerged in Europe during the 12th century and got settled in the Low Countries in its unique shape of independent communities of religious women from the 13th century onwards; a brief history of the Leuven Groot Begijnhof, its restoration by the university to transform it into an international and multicultural university estate.

After the introduction we go for a walk through the cobbled streets of the Beguinage.

The end of the visit is expected around 5 pm. Participants can either walk back to the parking at the ‘Grand Beguinage’ or have a farewell drink in a local café in the neighbourhood of the University Library.

The ‘Groot Begijnhof of Leuven‘ is a well preserved and completely restored historical quarter containing a dozen streets in downtown Leuven. About 3 hectares (7.5 acres) in size, with some 300 apartments in almost 100 houses, it is one of the largest remaining beguinages in the Low Countries. It stretches on both sides of the river Dijle, which splits into two canals inside the beguinage, thus forming an island. Three bridges connect the parts of the beguinage. The complete beguinage is owned by the University of Leuven and used as a campus, especially for housing academics.

How to get at our meeting points

There is a well-marked 800m trail to our meeting point.