A colony of artists in a rural village

Latem and the Leie region

The region between Ghent and Deinze, where the river Leie meanders through woody marshland, played a crucial role in the development of 20th C Belgian art.

In the 1850s two artists from Ghent, the brothers Xavier and César De Cock, moved to Paris to try their luck. Inspired by the innovating French landscape painters, they immersed themselves in nature and soon acquired name and fame. In 1860 Xavier returned and settled in the village of Deurle. César followed later. The brothers mainly painted the rural surroundings of Sint-Martens-Latem. Their fame laid the basis for the artistic future of the village. 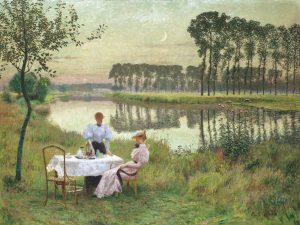 In 1881 the impressionist painter Emile Claus settled in nearby Astene, in search of the uncomplicated peasant life of his youth. He attracted several students and impressionism flourished abundantly along the Leie (1890–1914).

The international success of Claus attracted a group of young Ghent artists and – encouraged by the town clerk, an amateur painter himself – a colony of so-called symbolists established itself in Latem in the 1890s.

From 1905 on, a second group of artists settled in Latem and dedicated themselves to a more earthy expression of impressionism. They lacked the seriousness and the religious disposition of the first group; so, both groups had only superficial contacts.

At the outbreak of WW1, several Latem artists moved to the Netherlands where they came into contact with modern art, which accelerated their breakthrough to expressionism. After the war, all returned from exile and Flemish expressionism reached its full bloom in the 1920s.

After 1930 the economic crisis and WW2 jeopardised artistic life. A number of artists remained active in the region, but their work stayed in the shadow of international modernism.

After WW2 prices of Latem School paintings and sculptures boomed and the once rural villages along the Leie banks, particularly Latem, turned into a posh residencial area.

We start the day with an overview at the Mudel museum in Deinze. After lunch our coach brings us to the house of painter Gust De Smet in Deurle and to the house Gevaert-Minne in Latem.  For our comfort, the two language groups (Dutch-English) will cross-over for these visits.